FOUNDER OF HOW TO WRITE FOR SUCCESS GETS A SURPRISE 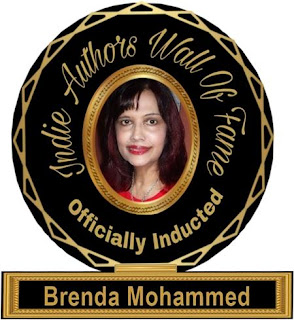 With every day comes new surprises and opportunities for HOW TO WRITE FOR SUCCESS GROUP.
Today it was the Founder's Day for surprises and opportunities.
Brenda Mohammed was surprised on her Facebook Timeline by Steve Caresser of Whole World News and EPrinted Books. Brenda saw this as an opportunity to make new friendships and members who will benefit the group.
Congratulations poured in for Brenda from members of all the affiliated groups.

Trinidadian Brenda Mohammed is a renowned, multi-genre,multi-award-winning author, and poet who has written twenty-four books to date.
The former Bank Manager holds a Diploma in Banking from the Institute of Bankers in London.
Brenda also obtained a Diploma in Life Underwriting from the American College, USA and
qualified for the Million Dollar Round Table, the Premier Association for Financial Professionals, six times in a row.
Brenda's writing career sparked after her near-death experience with Cancer and her recovery.
She wrote the book, I AM CANCER FREE which became a best seller.
That gave her the encouragement to continue writing.
Some of her books won multiple awards as follows.
Brenda is the Founder of the Facebook Group How to Write for Success.
Her work in Literature for Suicide Prevention is recognized worldwide.
She was the driving force in the production of A SPARK OF HOPE: A Treasury of Poems for Saving Lives.
The book topped the charts on Amazon and made Best Seller No.1 within the space of two days.
She is now working with her groups to produce Volume II,
.
LITERATURE AWARDS:
Brenda was appointed Vice-Chancellor of Motivational Strips Academy of Literary Excellence and Wisdom by the Founder Shiju H Pallithazheth on 5th November 2018.
In October 2018 she was appointed as  Honorary Member of the World Higher Literary Academic Council of WORLD NATIONS WRITERS’ UNION of Kazakhstan.
On 29th December 2018,  she was awarded the World Laureate in Literature by World Nations Writers Union.
On 30th December 2018, she received a Global Literature Guardian Award from  Founder of Motivational Strips and Associates, World Nations Writers’ Union, and Union Hispanomundial de Escritores.
On 31st December she received a Certificate of Honour for serving as a juror in an International Poetry Contest sponsored by World Nations Writers Union.
On 4th March 2019, for her efforts in maintaining and spreading Global Peace, Motivational Strips and its Nominating Authorities awarded her with a Golden Dove of Peace Award.
In August 2019 Brenda  received the World Poetic Star Award from World Nations Writers Union.
On 31st August 2019, she was honoured by the Seychelles Government Accredited Literary Society [ LLSF]for her contribution to World Poetry, creativity, and writing expertise.
On October 11th she received the Shakespeare Medal for her Literary contributions and selfless service from the Founder of Motivational Strips Facebook Group.
On 14th January 2020, she was inducted into the Indie Authors Hall of Fame.

I am Cancer Free: A Memoir is the true story of a Cancer Survivor.
You will learn that cancer does not have to be a death sentence.
It won two prestigious awards
1. Winner in the Category Non-Fiction in the McGrath House Indie Book Awards 2016.
2.Winner in the category Health and Fitness in Readers Favorite International Book Awards 2018.
My Life as a Banker: A Life Worth Living is a motivational memoir of Brenda's life in banking.
You will be inspired to find the courage to go on, never giving up, even when the road of life curves.
The book placed second in the Category Bio/Memoirs in Metamorph's Publishing Summer Indie Book Awards 2016.
Revenge of Zeeka: Horror Trilogy comprises of three stories in an award-winning series.
It teaches a great lesson.
Revenge does not pay.
The book received a five-star review and five-star seal from Readers Favorite on 14th September 2016.
Retirement is Fun: A new Chapter is filled with travel adventures after the author moved on from a banking career.
You will learn when one door closes, several others open.
Zeeka Chronicles: Revenge of Zeeka: How can one man misuse science for revenge?
This multi-award winning science-fiction novel inspired by the recent scare of the zika virus, and where zombies and robots take center stage will blow your mind.
It will take you on a futuristic journey into the year 2036.
This science-fiction futuristic thriller won four awards.
1.Winner in the Category Young Adult Thriller in Readers Favorite International Awards 2018.
2. Winner of the gold award in the category science fiction in Emagazine Readers' Choice Awards 2018.
3. Placed in the top ten finalists in the Author Academy Global Awards 2018.
4.Winner in Science Fiction in SIBA Awards 2017.
Memoirs of Dr. A. M. Khan: Journey of an Educator. Get a glimpse into life in the days of Indentureship in Trinidad and Tobago.
The book received four five-star reviews from Readers Favorite, in 2018.
Stories People Love - Six exciting short stories of crime, adventure, and love.
The stories are very alluring. The book won two gold awards in Connections EMagazine Readers’ Choice Awards 2019 - one in the Romance category and the other for topping all genres.
Adventures of Squeaky Doo - Five exciting travel Memoirs of a Teddy Bear. Children love Squeaky Doo. You will too.
Your Time Is Now: A Time to be Born and a Time to Die. Do you want to find your purpose in Life?
Are you looking for answers?
The book is the recipient of the IHIBRP 5 Star Recommended Read Award Badge.
Heart-Warming Tales - Six thrilling and suspenseful tales of Crime, Love, and Unhappy Marriages, all unified by the same theme - trials and tribulations of love.
Travel Memoirs with Pictures: Exploring the world. is a pictorial memoir of the author's travels. The book is great to read while on a vacation or for some travel inspiration.
Zeeka and the Zombies: Revenge of Zeeka Book 1 is the first book in a spine-chilling science fiction series.
Zeeka's Child: Revenge of Zeeka Book 2 - Mystery surrounds the birth of Zeeka's Child.
Zeeka Returns: Revenge of Zeeka Book 3 - Zeeka decides his fate.
Zeeka's Ghost: Revenge of Zeeka Book 4 - Zeeka's Ghost haunts Steven.

Resurrection: Revenge of Zeeka Book 5 - the sudden appearance of a stranger bothers Steven.
She Cried for Me is the heart-wrenching autobiography of a stray dog. The book is also available in Audio and is a best seller on Audible.com
How to Write for Success: Best Writing Advice I Received is a popular guide for new and aspiring authors. The book received a five-star review and five-star seal from Readers Favorite one month after publication. It also won the gold award in the category Non-Fiction in Connections EMagazine Readers’ Choice awards 2019 and a silver award for placing second in the overall categories.[First place went to Brenda's book - Stories People Love]
The book is my inspiration for founding the Facebook group, How to write for Success, with 5200 plus members. It is very popular amongst college and university students and new and aspiring authors who have written fantastic reviews about it.
The Gift of Love: Barry Holmes Investigates. is Book 1 in a crime fiction/romance which once topped the Amazon charts in all three categories of Kidnapping Thrillers, Private Investigation Mysteries, and Conspiracy Thrillers.
The Axe Murderer: Barry Holmes Investigates Book 2 is a crime fiction highlighting kidnapping for ransom.
Strength for the Disheartened: Motivational Poems  A collection of poems to motivate and inspire.
Dreams of the Heart: A Poetry Collection - a selection of a number of unique poems for romantic poetry lovers.
A Spark of Hope: A Treasury of Poems for Saving Lives - The poems within A Spark of Hope are therapeutic, and some have already saved lives.
Stories that Intrigue - contains the love story of Sam and Julia, two bestselling authors in six intriguing episodes. The binge and wanderlust of Julia will delight every reader. The Book cover was a nominee for best cover in AllAuthors.com.

Posted by HOW TO WRITE FOR SUCCESS GROUP at 14:50